Ongoing war in surrounding Syria and Iraq has meant that many people have had to flee their homes and are now refugees in Lebanon. Families live in refugee camps, often without access to basic necessities.

The Bible society in Lebanon is working alongside the local church to reach out to these people. They provide families with care packages which include food medicines and supplies. These packages also include a children’s Bible, gospel portion, New Testament and colouring book. For many people this may be their first experience of the Bible and engaging with it’s message.

One of our colleagues from the Bible society in Lebanon, Youanna, described her recent trip to a refugee camp, where she helped to distribute these care packages. She describes children running to them excitedly when they entered the camp, eager to see what they had brought. She spoke with them and ask them about their families and life in the camp. Then, when it was time to distribute their packages, families formed an orderly queue and received their packages, thanking Youanna and the other volunteers. She described as families walked away with their packages in hand, how they would already be opening it and pulling out the scriptures, beginning to read.

The local churches are involved in distributing these care packages and are charged with following up with the families who receive them. It is our prayer that through this work many people would be touched by the light of the Gospel and that they would find true hope in Jesus Christ.

The Bible Society in Lebanon is living the Word, not just distributing it. 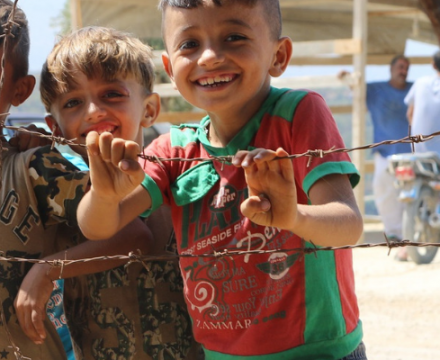